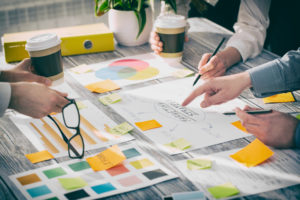 A company’s website is often the first point of contact with the world, yet many corporations have been behind the curve when it comes to their web presence. Bowen Craggs & Co., a London-based corporate communication consultancy, has published a critique of the websites of the world’s 200 largest companies, based on 2017 activity.

It’s Index of Online Excellence 2018 lists the 30 best websites, rating them on construction, message, contact, how well they serve user such as investors, media, job seekers, customers, and the general public. Topping this latest ranking was GlaxoSmithKline (GSK), the pharmaceutical company based in London (with a score of 216). Next were Bayer, BP, and Nestle.

Bowens Craggs says that when it published its last Index in 2016, there was “a depressingly large number of companies that have a vague idea of the importance of online communication.” There are signs this may be changing.

The study’s authors say it is still true that bosses in most large companies still regard corporate websites and social channels as marginal. They don’t generate direct revenue, so why put resources into them. There are only four U.S.-based companies on this list, and the authors say web governance remains a foreign concept in most American board rooms. (U.S. sluggishness or European bias?)

Here are ten trends that were noted in creation of the current Index.

1. The companies at the top are those that have polished their online presences once, twice and again
2. In 2017, responsive design became the default.
3. Responsive sites have tended to lead to a certain visual sameness by restricting the types of layout that work.
4. The problem, as we have noted many times,
is that beauty is too often linked with degraded navigation as menus are tucked away out of sight.

5. There have been brave efforts to find that most elusive creature: the internal search engine that works.
6. The novelty of ‘stories’ has worn off.
7. The ‘global-local’ question continues to tax large corporations:

8. There has been a fashion for cutting the size of sites
9. While many sites remain determinedly ‘corporate’, some are trying hard to justify their existence by supporting the marketing effort.
10. Social media has continued to mature

Here are the Index’s top 10 websites: